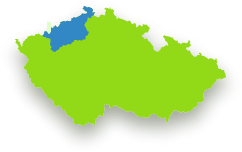 The history of our town is truly rich. The establishment of Klášterec falls within the period from 1150 to 1250. At that time, the Benedictines of Postoloprty founded a small monastery here, from which the name of the town is derived, although nowadays there is no monastery anymore. The Latin name of the town - Claustrellum appeared in written records in 1353 for the first time and three years later we learnt the German name - Klosterlin. The town's history is bound mainly to two families – the Fictums who established the today’s castle in the 16th century, and the county family Thun-Hohenstein, who owned the Klášterec-based estate from 1623 to 1945.

The most important milestones in the history of the town are the establishment of a porcelain factory in the late 18th century and the discovery of mineral springs in the late 19th century.

The tradition of porcelain production and spa industry has remained up to now and is still one of the most important town’s attractions.

Change in appearance, Structure of pages, print out